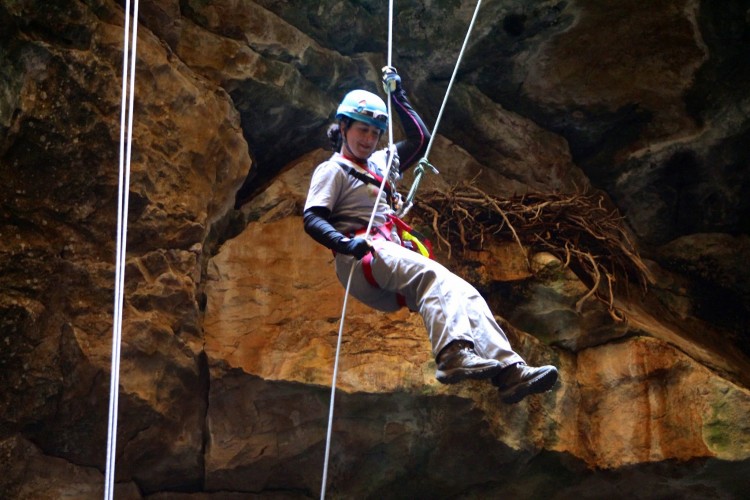 Julie Meachen, Assistant Professor at DMU, visited SEPL over the last week to continue work on the Natural Trap Cave project. Julie, along with Dr. Alan Cooper of the University of Adelaide, is the principal investigator on the grant that opened up Natural Trap Cave for research over the last 5 years. The original NSF grant focused on looking at how and why megafauna (large terrestrial mammals) declined leading up to the end-Pleistocene extinctions. While excavating the material to examine changes in the morphologies and genetics of megafauna species, we also excavated tens-of-thousands of fossils that can tell us how the survivors faired given some pretty extreme climate events that followed the end-Pleistocene, megafauna extinction. These are the specimens that we have been sorting while at Fossil Wednesdays!

Julie and I are writing a new grant to continue excavations at Natural Trap Cave and do a full survey of modern fauna surrounding the site. We plan to examine how species were able to weather the major trophic upheaval caused by most of the large animals on the landscape going extinct, and what their responses were to some extreme aridity events that have occurred since then. Using the fossils at Natural Trap Cave, we will be able to better understand what species are the winners and losers when drought conditions prevail for a very long time. This can tell us what types of patterns to expect across large portions of the West in coming decades.

Fossil Friday (formerly Fossil Wednesday) will start back up once GT has reopened fully. Good news? We will have a new location in the Ford ES&T building! Want more info? See the Fossil Friday page or sign up for the mailing list!

SEPL is seeking an excellent postdoc to join the lab! We will also be seeking graduate students during the next round of admissions (next winter). Please see here for more information about opportunities to join SEPL and become a part of an exciting community!

As a lab, SEPL is committed to the cause of anti-racism and promoting equity in our everyday lives and in our field of research. We commit to actively combatting systemic racism through the following activities. As individuals, we will educate ourselves about the history of racism in our society, and we will work to elevate the voices of BIPOC scientists in our field. As a lab, we will work to create more inclusive outreach activities by engaging partners from underrepresented groups. As members of the Schools of Biological Sciences and Earth and Atmospheric Sciences, QBios Program, and College of Sciences, we will strive to make research opportunities more open and available to disadvantaged and underrepresented groups. This includes expanding and supporting REU programs, abolishing GRE requirements, providing more career-building resources and programming, and making coursework and research opportunities more accessible. Each semester, we will revisit this plan and make concrete goals for the months to come.

We acknowledge the Muscogee Creek and Cherokee peoples, on whose ancestral lands we live, learn, and work.